From The World’s Most Beautiful City! 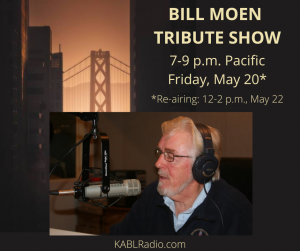 To celebrate Bill’s truly amazing life, KABL aired a very special Bill Moen Tribute Show to honor Bill and his legacy. This show included tributes and memories from Bill’s friends and colleagues – San Francisco Bay Area media legends, Bill’s favorite music, and some of Bill’s uniquely San Francisco musings of The City that he loved so very much.

For a fitting tribute worthy of a legend, please read the Bay Area Radio Museum’s article on Bill’s amazing life and career.

Rest assured, Bill will remain in the air – everywhere over San Francisco and the world on KABL Radio!

The Bill Moen Tribute Show is comprised of four segments and may be listened to below:

KABL Voted the 2021 Recommended Station of the Year! 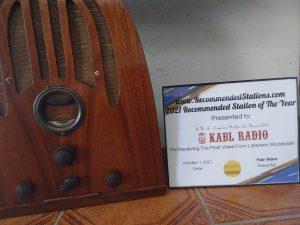 Thanks to YOU, our loyal listeners, KABL has been voted the 2021 Recommended Station of the Year!
Bill Moen expresses our gratitude perfectly: “[Thank you] for recognizing that Radio does, still, have an audience. Of course, to David Ferrell Jackson for putting KABL on the Internet, years ago, to Tony Onorad and his crew for reviving it this past summer and programming it so superbly but, most of all, to those who have listened for the past SIXTY years and to those newcomers, around the world. And, finally, to the inspiration and reason for it ALL. . .San Francisco, the only American city that can be compared to Paris, not in its history or its size but in that indefinable thing that can take your breath away. . .charm.”
Prior to the contest, Bill was interviewed by Peter Skiera on Peter’s Recommended Stations blog (scroll down to article number two). Enjoy this rich and colorful interview with our award-winning DJ!

KABL has returned to streaming in the air – everywhere!  America’s Best Music is back, along with Bill Moen’s San Francisco “musings,” along with Sid Mark’s “The Sounds of Sinatra” every Saturday from 5 to 7 p.m. and Sunday from 8 to 10 p.m. Pacific time, and the “Sunday Sounds” with our very own Trish Bell each Sunday from 9:00 a.m. to Noon Pacific.

Some streaming options include: The TuneIn app and by clicking here or here. We hope that you enjoy listening to America’s Best Music on KABL while we continue to tweak and improve our programming! Enjoy and don’t mind our dust! And please keep up-to-date on our programming by following us on Facebook.

It was the merry month of May 1959 when the soothing sounds of KABL Music first echoed throughout the Bay Area at 960 kilocycles on your radio dial. KABL, named for San Francisco’s cable cars, was a bold departure from other radio stations of that era.

Listeners responded to its elegant charm and sophisticated whimsy. In fact, the impact was so great that KABL became a hallmark of Bay Area radio. You can read more about the origins of this beloved station in Don Keyes’ wonderful memoir, “The Miracle By the Bay…KABL.”

Now, through the magic of modern technology, we are bringing back more than fifty years of KABL Music — from 101 Strings to Sinatra, from Mantovani to Dean Martin, from the best of the big bands to Tony Bennett, it’s America’s Best Music!

Remember way back when you could hear real music on your radio? Remember when you could get the feeling of being someplace magical simply by tuning in to a great radio station?

Those days have returned with KABL Music! We’re bringing back the classic Sound of San Francisco — lush, timeless instrumentals, unforgettable vocalists, swinging Big Bands, sophisticated jazz and countless cool musical surprises that you haven’t heard on the air in years.

It will remind you of the San Francisco of long ago, mornings in the Financial District, afternoons in Union Square, evenings at the Top Of The Mark, weekends at Playland At The Beach or simply wandering around Fisherman’s Wharf. 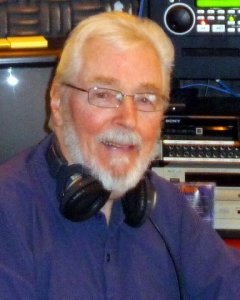 The Voice of KABL Radio is none other than the legendary Bill Moen, who spent more than forty years on the air on the station.

One of the original inductees into the Bay Area Radio Hall of Fame in 2006, Bill “retired” to Clear Lake, only to find himself back on the air at KXBX/1270 in Lakeport. 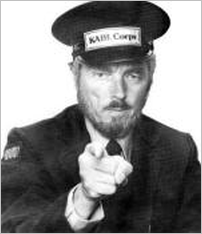 Bill began his KABL career in 1960 as one of the nameless voices behind the beautiful music on KABL.

In no time, his “Moen in the Morning” show won over the hearts and ears of his listeners during his four decades at the station — and finally was allowed to identify himself!

We are deeply indebted to Bill for helping us to bring the great sound of KABL Music to you once again!